It’s been two weeks since the UK entered #Lockdo

STOP trying to cut through the noise and BE the no

How the world became more ‘social’ in lockdown 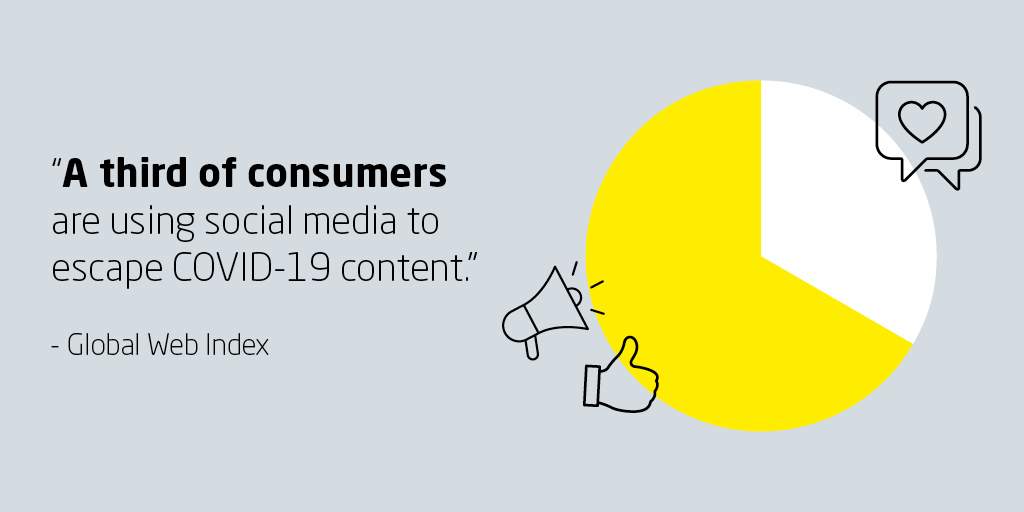 How the world became more ‘social’ in lockdown

A lot has changed in the world of social media since the pandemic first hit. Unsurprisingly, social media has flourished in lockdown, as people searched for ways to stay connected and entertain themselves whilst stuck indoors.

I’m guilty of spending hours on my phone just scrolling, and lockdown made this habit even worse! But it’s not just me, 82% of consumers admitted to increasing their social media consumption since the outset of the pandemic.

With restaurants, pubs, bars and everything else closed, there is only one thing to do, right? Look at memes on Facebook and escape reality.

As the world locked down, social media blew up.

So what’s new? Here are some quick-fire stats for you:

But let’s delve into some of the different platforms in a bit more detail, starting with Facebook.

In an attempt to reduce the spread of fake news relating to coronavirus, Facebook introduced its Covid Information Centre. The centre, which is accessible from the top of your newsfeed, prioritises conversations and news in your local area, including real-time figures on new cases and deaths.

Instagram was the UK’s top social media platform, with 46% of consumers saying they consumed the most content on the photo-sharing app. There has also been a change in the behaviour of users, with more active users during working hours, with a drop off in traffic after 6 pm.

Interestingly, the most popular form of content was influencer and shopping, with posts containing the #AD hashtag receiving an average of 76% more likes. This presents a fantastic opportunity for businesses looking to sell B2C products or services. In March, the cost per click (CPC) of social advertising was at an all-time low, which meant that advertisers could get more results with lower budgets.

Twitter is pretty much the same as the other channels when it comes to growth. As expected, tweets around coronavirus have shot up, with global conversations quadrupling in March. In addition, the number of tweets about cooking and gaming increased, as lockdown hobbies became all the rage.

Like Facebook, Twitter has also been trying to control the sharing of misinformation; and as we know too well, it’s struggled with fake news for years. By prioritising content from trustworthy sources and has employed more automated technology to flag and remove misleading posts.

Love it, or hate it, TikTok is on the rise

Last, but not least, TikTok. Where do we start?

With a third of consumers using social media for escapism and many on the search for memes and funny content, it’s no wonder TikTok has seen rapid growth in lockdown. Who doesn’t want an app with hilarious lip-syncing, music and comedy videos?

Providing some escapism, relief and laughs, TikTok was quick to become one of the biggest social platforms, receiving 315 million downloads in its first quarter. It brought families together who live in the same household, as people across the globe got involved in viral video challenges.

An addictive platform with millions of active users, TikTok was a shiny new toy to marketers and brands, who started to dabble in video advertising and influencer campaigns to boost reach, exposure and hopefully go viral.

But will the popularity of TikTok last? Only time will tell…